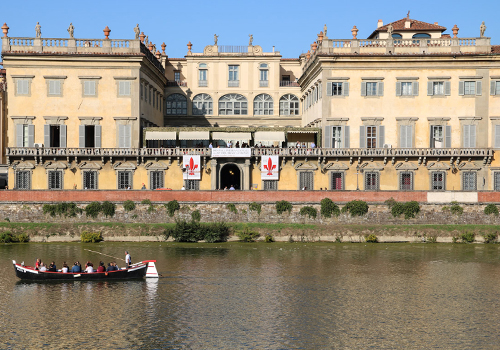 Palazzo Corsini sull’Arno, once the property of Grand Duke Ferdinando II, was purchased by Maria Maddalena Machiavelli, wife of the Marquis Filippo Corsini, in 1649. The Palazzo that was initially known as a "Casino" – little house (so-called as it was small and surrounded by a large garden that reached down to the banks of the River Arno), belonged to the Ardinghelli Family before passing into the hands of the Medici, and finally to the Corsini family.

The building is in late Baroque style, as can be seen in its entirety, from the stone statues rising up on the roof to the ancient terracotta crater urns enhancing the original open space in the centre of the façade.

The two architects of Palazzo Corsini were Bartolomeo (1622-1685), son of Filippo and Maria Maddalena Macchiavelli, and Bartolomeo’s son, Filippo (1647-1705). The construction of the Palazzo required 50 years of uninterrupted work.

The decorations carried out inside the Palazzo from 1692 to 1700 are a reminder of the splendour of one or the most flourishing and intense periods of Florentine painting. Worth noting among the painters commissioned by the Corsini family to decorate the noble apartment on the first floor where the Aurora Gallery, the Salone, the Ballroom and other rooms are found, are Anton Domenico Gabbiani, Alessandro Gherardini, and Pier Dandini.

It is precisely in this splendid setting of rooms, unique in Florence for their inventions and architectural features, that the International Antiques Fair is held every two years.