PRESS CONFERENCE FOR THE PRESENTATION OF THE 31th EDITION 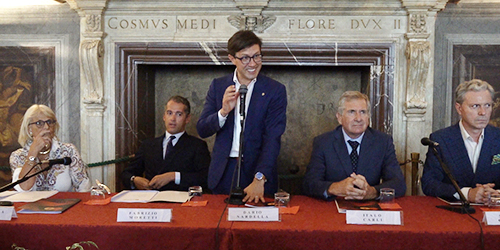 The press conference for the presentation of the 31th Florence International Antiques Fair has taken place. In the Sala degli Elementi of Palazzo Vecchio, in the presence of Mayor Dario Nardella, who is also honorary president of the BIAF, Secretary General Fabrizio Moretti presented the event which will celebrate 60 years of activity of this exhibition dedicated to promoting the finest works of art in Italy.

From the 21 to the 29 September at Palazzo Corsini the 31st BIAF Florence International Antiques Fair will involve 77 galleries on the international scene, including 16 new entries, specialising in a wide range of artistic disciplines, whose exquisite selections are bound to charm the numerous private collectors, Museum Directors, Superintendents and curators coming from all over the world.  The fair's mission is to promote Italian art and its market. The quality and concreteness of the works of art offered on display, together with the unique location of Palazzo Corsini, overlooking the Arno river and with Florence all around, are what mark it out and make it the second biggest antique art event in the world.

"My dream – says Secretary General Fabrizio Moretti - is that the BIAF brings to light all those works which are important documents in the history of art, thanks to the passionate commitment of all the gallerists, thus becoming the benchmark not only for the art market, but also for the wider public in Italy and beyond".

Mayor Dario Nardella underlined the importance of the quality that the Biennial expresses: “It is only on quality that we can build a cultural offering that is not without the financial aspect; the city of Florence is the birthplace of philanthropy, where modern collecting began, where we might say the roots of the modern art market originate. We must defend the art market, that which is transparent, and legal, that which protects and safeguards culture, we must fight fiercely against the illegal market, because it is the illegal market that casts a shadow over the entire great world of the art trade, that is not deserving of the prejudices that still exist. They exist in the intellectual world, in the institutions and among legislators; we must distinguish the market that is good for us, for collecting, for the economy, that is popular and that brings Italy appreciation from all over the world, from those practices which exploit cultural heritage and have nothing to do with the universal right of every individual to benefit from a work of art.”

For the occasion of the Biennial, the first “Florence Art Week” will take place, a week of events, exhibitions, performances and meetings involving all the Florentine galleries, from ancient to contemporary art. "A movement" says Fabrizio Moretti, the BIAF's Secretary General, "that takes its cue from the Biennial and which will get the whole city and its visitors involved in this week of art. A number of Florence museums will be involved, and also the finest craft businesses, the art galleries of Via Maggio and Via de Fossi, the historic streets for art shopping, as well as the boutiques of Via Tornabuoni and Ponte Vecchio, which will offer unusual events open to collectors and the general public".

The BIAF will also launch a new "Prize for decorative arts and design" thanks to the sponsorship of Ronald S. Lauder, who during the course of the Biennial will award it to a set of three works recommended by a designated jury. The 25,000 Euro sum will go towards the restoration of certain works of decorative art of public cultural heritage.

In addition, in the Alcove room on the first floor of Palazzo Corsini, visitors can enjoy "UNIVERSO BARDINI", an exhibition curated by David Lucidi on the figure of Stefano Bardini, "prince of antique dealers", dedicated not to his usual role as dealer-collector, but to his place in the affairs of art collection between the nineteenth and twentieth centuries, and his vital role in the creation of important international collections. Works that today are part of the Bardini Museum and that are most representative of his exhibition aesthetic as an avid collector will be on display for the occasion, along with others lent by private collectors and antique dealers.

The layout, created by Matteo Corvino, will have some surprises in store centred around the display of the spectacular chandeliers from the former Teatro Comunale di Firenze, designed by Carlo Scarpa and produced by Venini, and which will be placed in the two entrances in collaboration with the fine craftsmanship workshops of San Patrignano.

The leading figures of the worldwide art market – including new entries Simon C. Dickinson and Peter Finer of London, Nicholas Hall of New York, Galerie Canesso of Lugano and Paris, the Galerie Sismann of Paris, Galleria Continua of San Gimignano, the Spanish Deborah Elvira and Galleria Poggiali of Florence – will present a wide array of over 5,000 works.

For painting: a view of the Redentore in Venice, oil on canvas by Canaletto (1697 – 1768) will be exhibited at the Galleria Dickinson; at Matteo Lampertico the 1716-18 oil on canvas Siface davanti a Scipione l’Africano by Giambattista Tiepolo will be on display; the Galleria Salamon will present a tempera on panel with gold ground of Madonna and child enthroned with six saints, recently identified by Angelo Tartuferi as the work of Florentine painter Ventura di Moro (Florence 1399 - 1486), dated c. 1430; an oil on panel of the Holy family with the infant Saint John the Baptist by Domenico Beccafumi (Siena, 1486 – 1551) will be on display at the Galleria Orsi; Galleria Marletta will show an oil on canvas with original frame of Venere educatrice di Amore by Pelagio Palagi (Bologna 1775-Torino 1860), from the second decade of the nineteenth century; a tempera on panel of San Pietro Martire nella sua cella conversa con tre vergini (Agnese, Caterina e Cecilia) by Antonio Vivarini (recorded in Veneto 1440 – 1476/1484), a c. 1450 work notified in 2006, will be on display at the Galleria Enrico Frascione stand; the oil on canvas The Philosopher by Dirck van Baburen, dated c. 1618-19, will be exhibited by Nicholas Hall; Antonacci-Lapiccirella offers a double portrait by Giovanni Boldini, recto Woman with hat and verso Nude woman seated, c. 1905.

Some important sculpture: the 1658 Bronze bust of Urban VIII Barberini by Gian Lorenzo Bernini (1598-1680) can be admired at the Galleria Orsi stand; Longari Arte has selected a 105 cm diameter marble tondo depicting the Madonna col Bambino e San Giovannino by Benedetto da Maiano, a previously unknown work, and the object of a careful study of attribution by Francesco Caglioti; the Galleria Botticelli Bacarelli will display a San Carlo Borromeo in Carrara marble by Ercole Ferrata (Pelsotto, Como 1610-Rome 1686); the statues in Carrara marble of Elisa Bonaparte Baciocchi Levoy and Felice Pasquale Baciocchi Levoy made in c. 1809 by Lorenzo Bartolini will be on display at Lullo • Pampoulides.

For 20th century art: the 1948 Autoritratto delle nuvole by Giorgio De Chirico will be displayed at Tornabuoni Arte; Mattinata sul mare, 1929 oil on canvas by Giulio Aristide Sartorio will be at the Galleria Berardi.

Contemporary art: in the spotlight with: a work by Daniel Buren Peinture et collage sur papier, 1964, and with Michelangelo Pistoletto L'alto in basso, il basso in alto, 1977 for Galleria Continua; Galleria Dickinson will present the 1964-65 Concetto spaziale by Lucio Fontana.  Arte Povera will be represented at the BIAF by the works of Gilberto Zorio offered by the Galleria Poggiali. Vulcano per purificare le parole, 1983, is an emblematic work even in its title, encapsulating as it does the artist's conceptual poetic.

Representing the art of drawing: an 1893 pastel on paper, entitled Aligi, by Francesco Paolo Michetti at the Galleria Berardi.

Among the numerous items of furniture: a 1787 pair of commodes with door and drawer, veneered and inlaid, with white Carrara marble top, frame in walnut inlaid with rosewood, maple, green maple, box and other woods, the work of Giuseppe Maggiolini, can be seen at Piva & C.; Robertaebasta will show a thirties console table in Ferrara walnut burl with two drawers and brass detail by Gio Ponti (1891-1979).

Lastly, a space for jewellery and collector's items: Deborah Elvira presents an alamaro (brooch) in gold, enamel, emeralds and pearls made in the 17th century in Spain; a wood and steel flintlock rifle made by Michele Lorenzini, bearing the monogram of Ferdinand III De' Medici, Grand Duke of Tuscany, will be presented by Peter Finer.

The main events of Florence Art Week include:

As it does every year, the BIAF avails itself of high-level partnerships, including with main partner AXA XL Art & Lifestyle, and Fondazione CR Firenze, which once again has offered its invaluable support in putting on the event, and a new partnership with the Maggio Musicale Fiorentino. Thanks to this latest partnership it will be possible to enjoy the exhibition “La Biennale in bianco e nero”, a selection of historical photos from the BIAF archives selected by Bruno Botticelli and displayed in the foyer of the Teatro del Maggio: many are candid shots of its many illustrious visitors, from a smiling Sophia Loren and an Ava Gardner shielding herself from a bothersome paparazzo, right up to more formal portraits of Presidents and public figures solemnly walking around the stands, and above all, the antique dealers themselves, the real stars of the show.

The partnership with the Maggio Musicale Fiorentino also makes it possible for all participants in the exhibition to see the programmed shows at the Teatro del Maggio during Biennial week (La Traviata and the diptych Pagliacci/Noi, due quattro...), at a special concession. A concert that will take place in the Throne Room of Palazzo Corsini during the week of the exhibition is also planned.

For the national and international public, the BIAF has planned a series of experiences: special visits to the exhibition, which can be combined with more convivial moments at the Palazzo Corsini and throughout the city. The partner for these activities is Musement, a multi-platform operator for searching for and booking tours and attractions all over the world. The provider, an ever-faithful collaborator in international events, is accordingly the official booking partner of the International Biennial. It will be possible to buy Exhibition tickets online on the official Biennial website, on the www.musement.com site and affiliated agencies, and via the Vivaticket circuit.